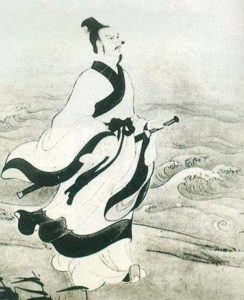 Qu Yuan, a patriotic politician and a famous poet, who lived 2,000 years ago, once served as a supervisor and imperial household administrator in the state of Chu.

But later he was banished by a muddle-headed ruler to a remote place south of the Yangtze River. When he learned the news that the state of Qin had captured the Chu capital, he was so overcome with indignation and sorrow that he threw himself into the Miluo River in today’s northeastern Hunan Province. His poems including Laments at Parting, Nine Lyrical Poems, and Sacrificial Songs have won international fame and occupy an important place in the world’s cultural history.

Qu Yuan’s birthplace is Lepingli Village, 70 kilometers from Zigui County, which can be reached by bus from Xiangxi (Fragrant Stream). It abounds in cultural relics and folk tales concerning the patriotic poet.

Nowadays, in Qu Yuan’s home town – Zigui, there is a Qu Yuan Temple, Qu Yuan Tomb (only his clothes and hats buried), a Bronze statue, Poetry Reciting Terrace, etc, which attract many visitors from home and abroad. 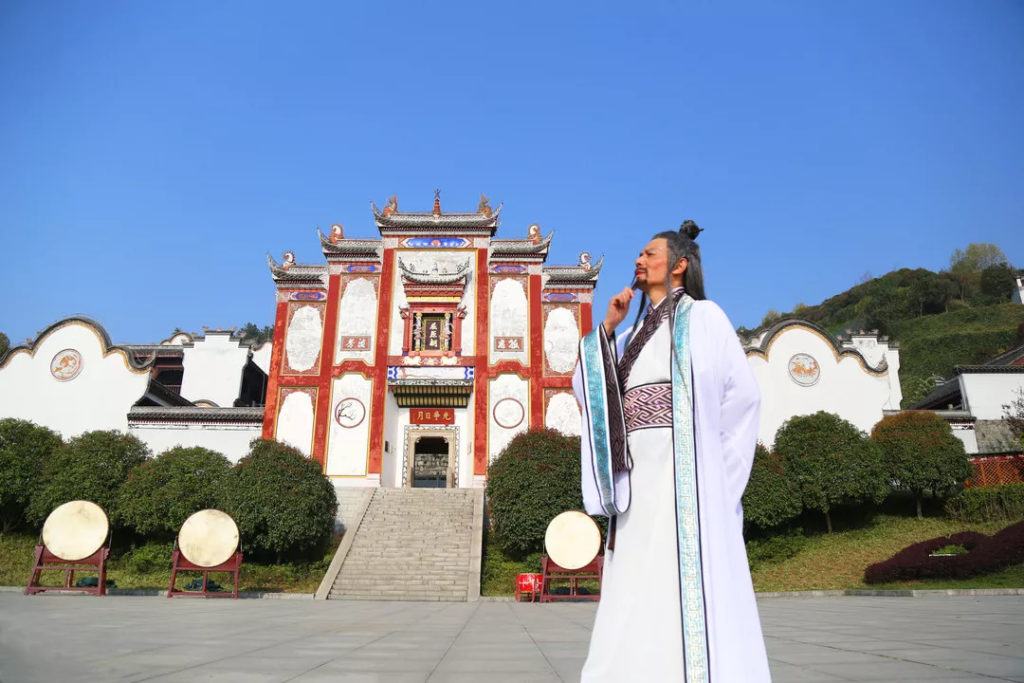 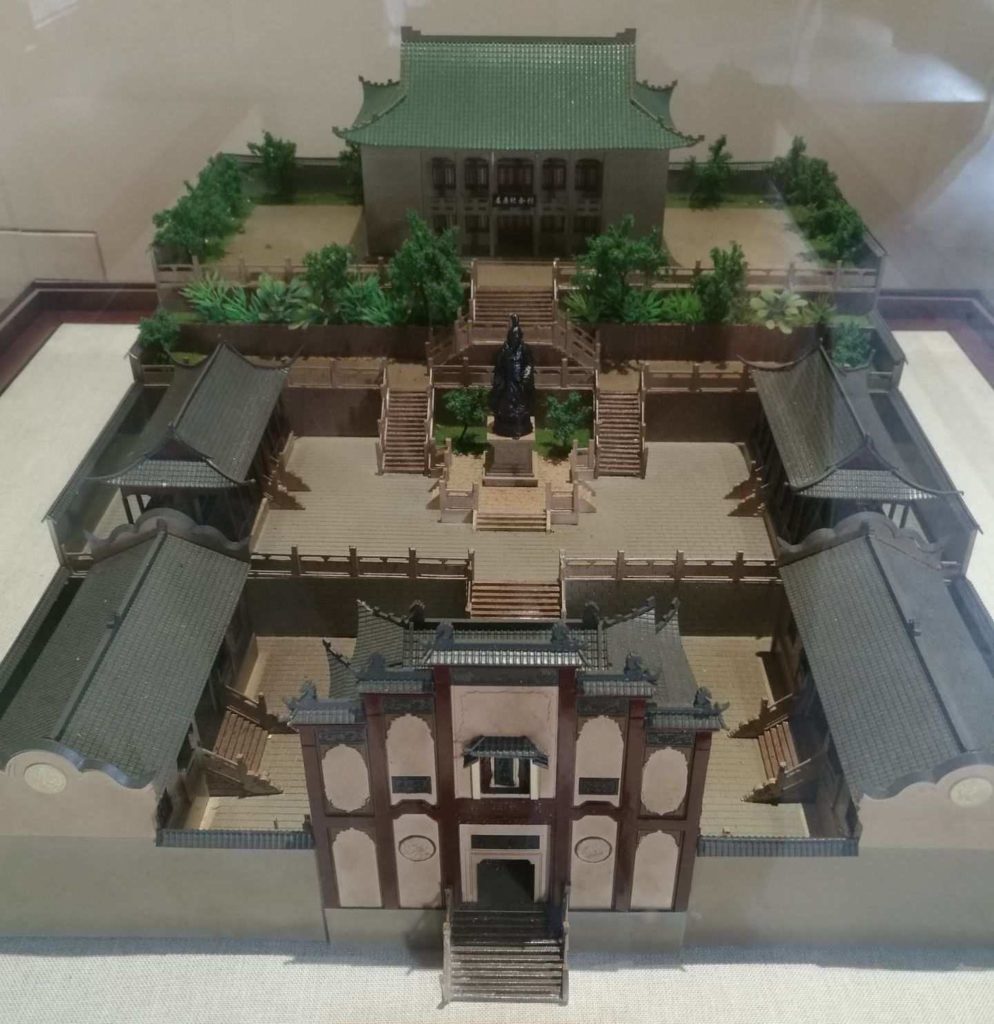 Miniature of Quyuan Temple in 1970s

Other sites of interesting: 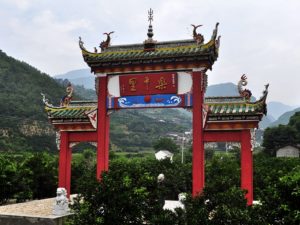 A folk tale says that a family lived here some 2,000 years ago. The head of the household was named Boyong. His wife became pregnant and, when her time came, he saw a mass of auspicious cloud floating in the sky and also heard sweet music nearby. Surprised, he set table and burned incense and kowtowed to the heavenly deities. Then, an infant boy was heard crying in the room. Instantly, a waft of indescribable fragrance drifted into the courtyard. Boyong loved his son especially because the latter’s birth was accompanied by a mysterious phenomenon. He named the child “Qu Yuan”. And the place earned its name, “Incense Burner Levelland”, because of the fragrance resembling that of incense, which assailed Boyong’s courtyard when Qu Yuan was born. 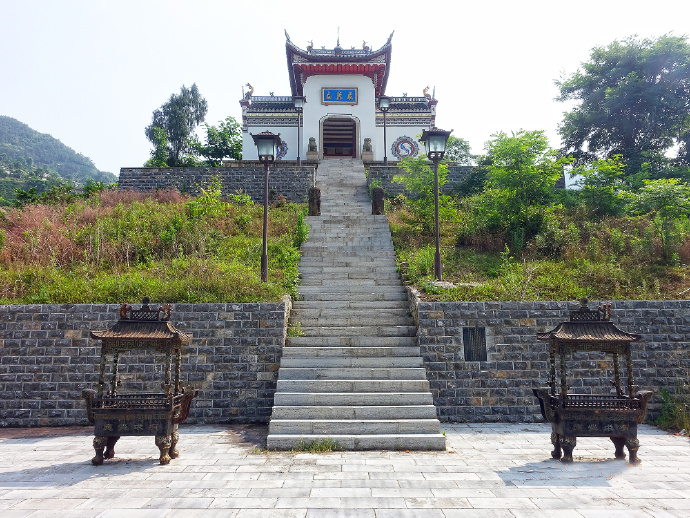 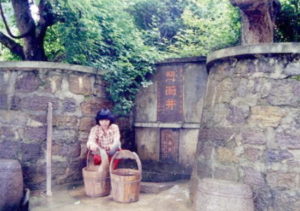 On Tiger-Taming Hill opposite Incense Burner Levelland lies an ancient well reputedly dug by Qu Yuan himself. The ground was so hard that he could only make a dent with a great deal of effort. Undaunted, he went on digging until he moved the Mountain God who gave him a pickaxe. With this tool, he kept digging for forty-nine days on end and finally, water gushed out. The well had plenty of water throughout the year, and its water was so clear that every day Qu Yuan and his sister Nu Xu dressed themselves up using it as a mirror. Hence the name “Mirroring Well”.

In 1860, during the Xianfeng reign of the Qing Dynasty, the villagers erected a stone tablet under and an evergreen tree beside the well. Inscription on the tablet says that care should be taken to keep the well clear and clean and nobody should cut the tree for any use. Tourists can see these two legacies for themselves when they visit the place. 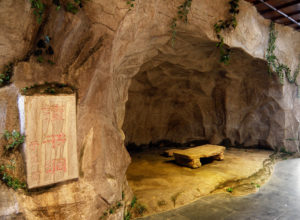 This cave, about halfway up a hill over Xiangguxi valley, is said to be where Qu Yuan studied in his early years. A new stone tablet now stands outside the cave’s entrance, on the site of an old one erected during the Tongzhi reign (1862-1874) of the Qing times, the former inscription (Dushudong, meaning Reading Cave) having become illegible. People say that the cave contained a stone table, a stone chair and a stone bench in the days when Qu Yuan used it. One can even hear somebody reading books inside when approaching it on a quiet night. This is in fact an illusion, because the sound comes from the nearby Booming Drum Cave where the wind creates a gentle noise when it blows over a stream.

West of the latter cave is Booming Drum Rock, which is surmounted by a round stone terrace. This structure bears the name Drum-Beating Terrace because it is said that King Zhuang of the ancient state of Chu once beat battle drum here to raise the morale of his embattled soldiers. Its another name is Poem-Reciting Terrace owing to the fact that Qu Yuan often came here to recite his own verses. 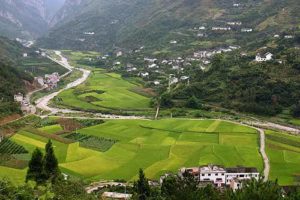 At the lower part of Wangzhai Hill not far from Book Reading Cave stands the newly reconstructed Qu Yuan Temple. Two springs below it issue water all year round to irrigate three plots of paddy fields known as Three Paddies Growing lade-White Rice. According to a folktale, these were where Qu Yuan planted rice in his days. An Unofficial Biography of Qu Yuan by Shen Yazhi of the Tang Dynasty (618-907) says that, during his exile, Qu Yuan whiled away his time by writing poems and planting rice. He was always concerned with the tragic fate of his country, so much so that sometimes he shed tears while working in the fields. “Rice as white as jade grew where his tears fell.”

Tourists find that the local buffaloes do not wear strings through their noses, but they know where to turn round when ploughing the paddies. People call them “Qu Yuan’s Divine Buffaloes”. Legend has it that, on his home journey from the Chu capital, Qu Yuan was accompanied by an attendant who carried on a shoulder pole seven bundles of bamboo slips inscribed with his works depicting the suffering of the common people. When they were nearing his home, a string tying one of the bundles broke.

An old peasant untied the string from his buffalo’s nose and gave it to the attendant to hold the loose slips together. For all the 2,000 years since then, the local buffaloes have been without strings threaded through their noses. There are, of course, no divine animals in the world, only that the peasants in Qu Yuan’s hometown have a special method of training their buffaloes. Nevertheless, the story itself reflects the Zigui people’s respect for this great historical figure.