Century Cruises, founded in 2002, has become a leader in the Yangtze River cruise ship industry and now is operating seven cruise ships and offering passengers with the most enchanting cruising experiences on the Yangtze River. After the launch of the brand new cruise ship – Century Glory in September 2019, the Century Cruises won the Travel Weekly Magellan Awards for 2019 in the Eco-Friendly “Green” Cruise Ship category, and Corporate Travel Awards “Luxury Cruise Line of the Year” in 2017, 2018, and 2019.

There are other brand new cruise ships under construction in the shipyard, such as Century Victory, Century Voyager, Century Oasis, and Century Dream, and they are joining the Century Cruises fleet in the next 2-3 years. 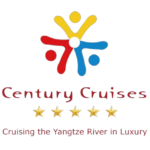 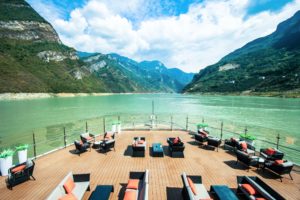 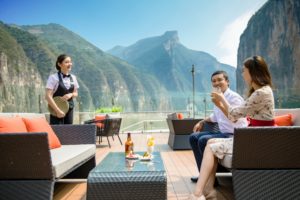 To give you a better understanding of Century Cruise’s travel experience, we have cited some European tourists’ feedbacks on Century Cruises.

By Fabian G from Germany

“We booked a 3-day cruise tour on the Yangtze River. At first, I was a bit skeptical if I would like it but it was really great! The ship was equipped with everything (gym, bar, restaurants…) and the Yangtze River is rather beautiful. You can definitely recommend it!”

By Gode from Germany

“On the occasion of a holiday trip in China we spent three days on a Century Cruises ship – Century Paragon. Pleasantly spacious cabin, friendly staff, magnificent Three Gorges scenery and delicious food. A successful break on our China tour. Hope to do it again!”

Would you like to take Century Cruises from Chongqing or Yichang?

There is no price difference, and the only difference is when you take a cruise from Chongqing, it is one day quicker. Cruises sailing from Chongqing to Yichang are 4 days and 3 nights, while Yichang to Chongqing cruises are 5 days and 4 nights (downstream cruises sail with the current and are a bit faster). Upstream and downstream cruises include almost the same sights and excursions.

Back to All Century Cruises Ships
Other Yangtze River Cruise Lines