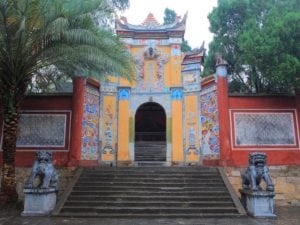 On the picturesque banks of the Yangtze River, the city of Baidi Cheng (White Emperor City) is surrounded by lovely mountain peaks and ancient pagodas.

This strategic place along the river near Chongqing was first chosen for settlement nearly 2,000 years ago, when a soldier named Gongsun Shu chose this place as his base of operations. The ancient story says that he chose the location when he saw a vapour dragon rising from a well. The region is known for its gentle river mists, but the soldier took the vision as an endorsement, and declared himself to be the “White Emperor”, naming this place White Emperor City.

Almost all Yangtze River cruises provide the White Emperor City tour as an optional shore excursion, price about CNY 290-295 (about US$42) per person for purchase onboard, including admission fee, port to site transport, English-speaking guide service, port taxes.

Today, visitors can still see the remains of the ancient city walls, and the nearly 2,000 year old temple complex that was built to mark Sunshu’s death. The temple now sits on an island, connected by a footbridge to the north bank of the Yangtze, ever since the construction of the Three Gorges Dam. 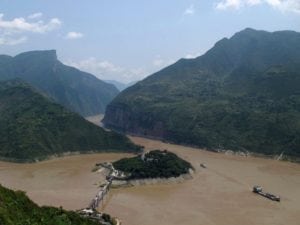 Gongsun Shu was not the only figure from Chinese history to have lived in this pretty place. The city is also known as “The City of Poems”, because of the inspiration it offered to so many of the country’s great poets. The famous Du Fu lived in the Western Pavilion, overlooking what he described as “the limitless Yangtze”.