More Facts about the Gezhouba Dam

After rushing out of Nanjin Pass, the Yangtze River slows down and widens from 300 meters to about 2,000 meters. Three kilometers east, in the suburbs of Yichang City, a huge dam lies across the river. This is the Gezhouba Dam, a major part of the multi-purpose water control project to bend the Yangtze to human purposes. 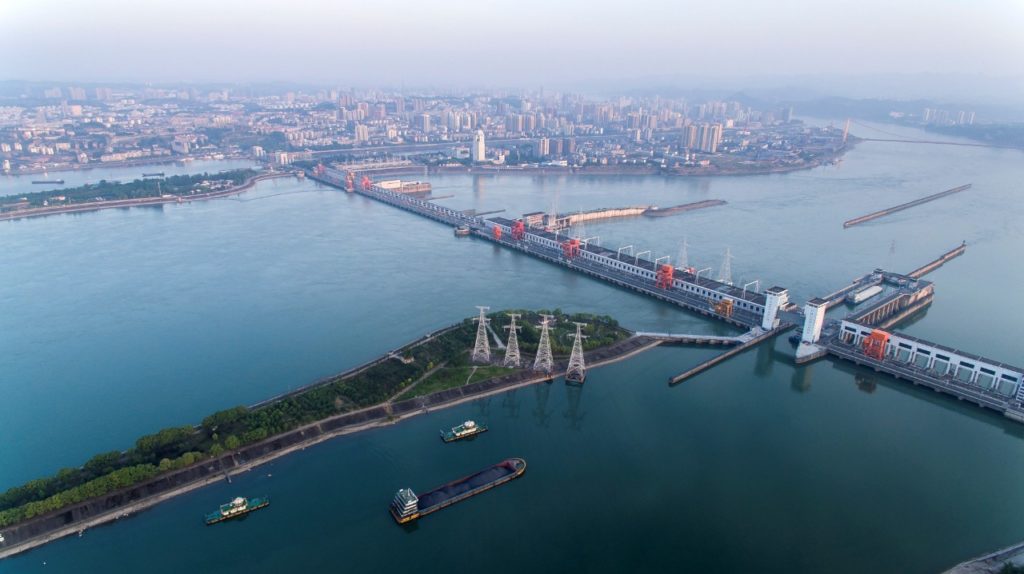 The main channel here was closed off on January 4, 1981, and navigation and power generation began in June the same year, marking the completion of the first phase of the key project. Beyond Nanjin Pass, two islets, Gezhouba (from which the dam project gets its name) and Xiba, divide the river into three waterways, the main, second and third channels. The main channel is filled with water all year round while the other two are dry during the low-water season. The possibility of diverting the water of one into the others so that construction work can be carried out makes the site ideal for the water conservancy scheme.

With the closure of the main channel, the Yangtze has changed its age-old course to roll forward through the second channel. Building a dam across the main section of a river which is wide, deep and has an enormous flow is something unheard-of before. 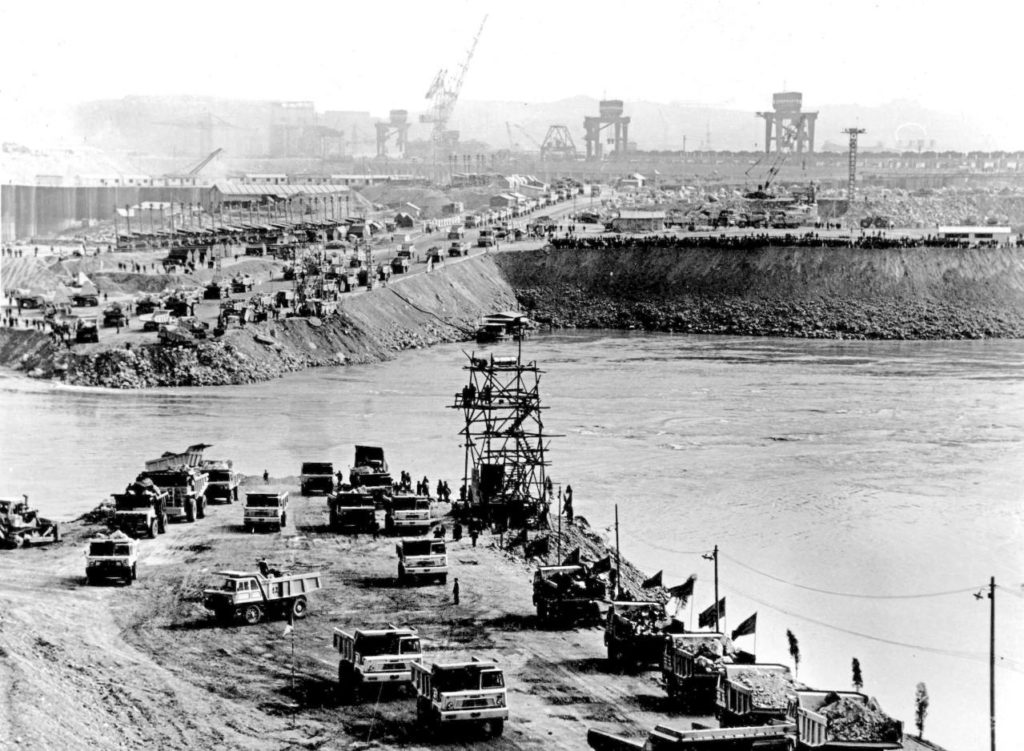 Gezhouba Dam Construction – Closure of the Main Channel of the Yangtze River in Jan. 1981

Now the 2,561-meter-long dam has created a reservoir upstream with a holding capacity of 1.58 billion cubic meters. The project involved the removal of 55 million cubic meters of earth and rock, the installation of 65,000 tons of metal structures, and the pouring of 10 million cubic meters of concrete. This last figure equaled the combined total for the five other key water conservancy projects in the country – the Liujiaxia, the Sanmenxia, the Danjiangkou, the Gongzui, and the Xin’anjiang -and is enough to build a 10-meter-wide and 50-centimeter-thick road extending from Guangzhou to Beijing.

The designing and construction of the dam and the installation of the equipment were all undertaken by Chinese personnel. As far as the amount of work and the technical standard are concerned, this cross-river structure ranks first among China’s hydropower projects.

There are two power stations at the dam site one in the main channel the other in the second channel. They have sets of turbo-generators, with a total installed capacity of 2.715 million KW to generate about 14.1 billion kWh of electricity a year. The biggest in China in the 1980s, they supply power to the central China grid, greatly promoting industrial and agricultural Production in Hubei, east Sichuan, north Hunan, and southwest Henan. 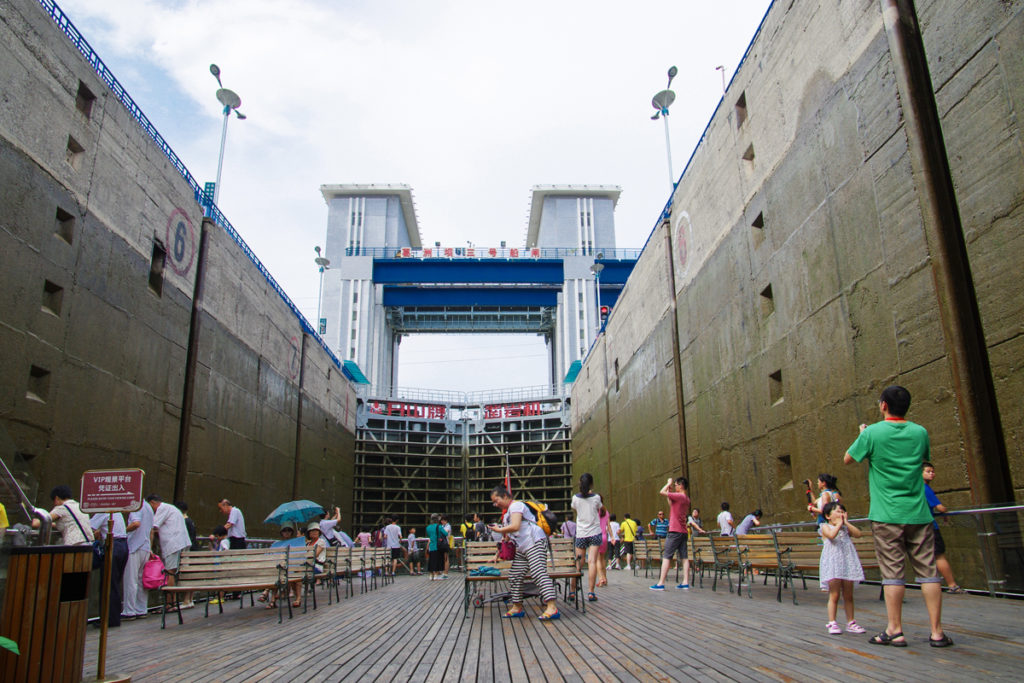 Two silt-scouring sluices and two silt-prevention dykes have been built to facilitate navigation. When the reservoir is filled with water, the water level at the dam can be raised by 20 meters. In the dry season, the water can retreat 180 kilometers, to the west end of Wu Gorge, while at flood time, the water can move back as far as Badong, a distance of 100 kilometers. With the conclusion of the first phase of the project, the water level along the Three Gorges has been elevated by 10 meters and many shoals have been submerged, greatly improving navigation.

The simultaneous operation of the 27-bay spillway and the three silt-scouring sluices can discharge a water volume of 110,000 cubic meters per second, the maximum figure of the 1870 flood. Moreover, a railway-highway bridge has been built atop the dam. The bridge surface can be raised or lowered to allow large ships to pass, the Maximum lift being 18 meters. 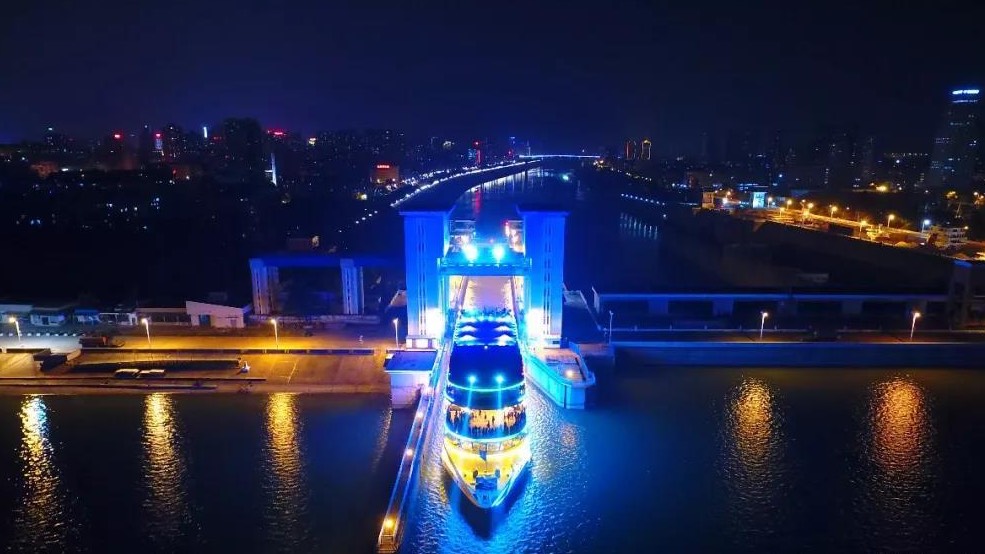 Apart from economic benefit, the Gezhouba project is a boon to tourism. With its overall completion, a number of gardens will appear along this section of the river together with tree-shaded roads at the sites of the three channels. Chinese and foreign travelers visiting the Three Gorges will be tempted to include Gezhouba project in their itinerary. They will find this man-made wonder a feast to the eye and the imagination, a monument to human ingenuity in taming China’s longest river.