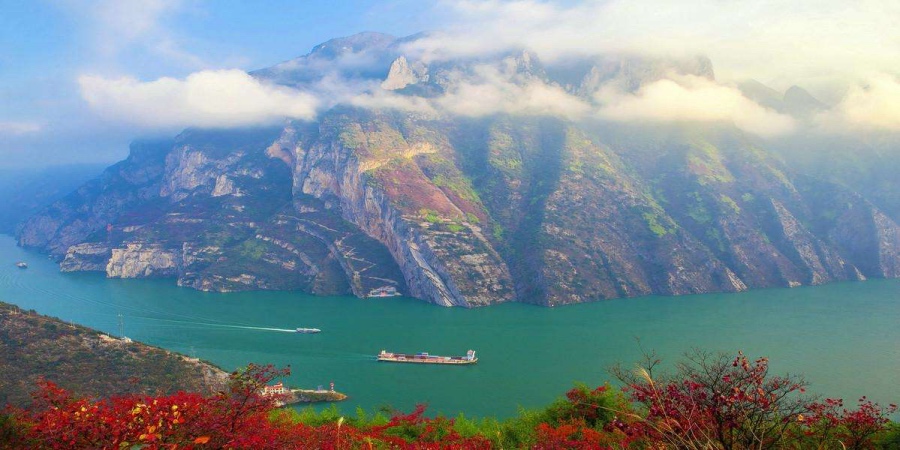 “When the Qutang rolls on to an end, The Wu Gorge rises with its lofty peaks.” When the Yangtze flows out of Qutang Gorge and past the broad valley of the Daning River, it enters the scenic Wu Gorge.

Wu Gorge is 45 kilometers long, extending from the mouth of the Daning River in Wushan County, Chongqing City in the west to Guandukou in Badong County, Hubei Province in the east.

Noted for its deep and serene scenes, the Wu Gorge is full of zigzags, weird peaks, rising mists, and beautiful sights. As the river cuts through the Wushan Mountains, its roaring currents change their directions constantly. Traveling through the gorge in a boat, one sometimes may find the way blocked by mountains. But a sharp turn of the boat brings one to an area of entirely different scenery. It is the most beautiful part of the Yangtze, green trees and bushes, together with fogs and clouds, cover the high peaks.

The famous Twelve Peaks on both banks of the river, in particular, are the most spectacular. These triangle-looking peaks described by legend as twelve fairy spirits, such as a fairy maid dancing, a dragon soaring into the sky, a peacock displaying its feathers or a piece of colorful brocade. The best–known is the poetic Goddess Peak, the graceful shape of which resembles a girl looking down at the boats in the river. Many mythological tales and countless number of poems have been written about this particular peak.

Wushan at the entrance to Wu Gorge and Badong and Zigui in the broad valley of the Fragrant Stream (Xiangxi) are famous towns in the gorge. There are many famous historical sites too. The town of Zigui is attracting a large number of tourists because it is the native place of the great ancient poet and patriotic politician Qu Yuan and the famous beauty Wang Zhaojun from East Han Dynasty 2,000 years ago.

The Daning River at the western entrance to Wu Gorge is flanked by continuous strange peaks, some of them rising into the clouds and presenting an unusual scene. The section of the river becomes known as the Lesser Three Gorges. Their unordinary beauty is so charming and it has been praised by more and more visitors.